This half term, we have been learning all about continents!

We started the topic by looking at Google Earth and searching for places that we were familiar with. We zoomed in on our school and enjoyed seeing the playground and field from up above! We learnt that there are 7 continents and 5 oceans. 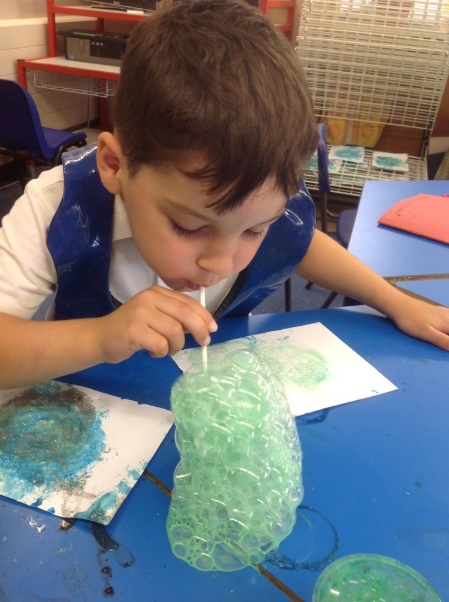 The first continent we looked at was Oceania, sometimes called Australasia. We looked at the Great Barrier Reef and talked about how we could look after the ocean and the planet. We learnt the names of some sea creatures that live there, and found out some facts about them. The children had a go at some bubble paintings and experimented with blowing bubbles in watery paint to create a sea effect picture. We also did a Science experiment where we tested various objects to see if they would float on water with no salt, a bit of salt and a lot of salt!

Our next continent was Antarctica! We found out that no humans live there, they only go for a short while to do scientific research. We learnt about how cold Antarctica is through exploring ice in the tuff spot and looked at animals that live there and how they survive in the cold. We also found out some facts using non-fiction books.

We then learnt about the continent of Europe. We looked at some of the landmarks around Europe, such as the Eiffel Tower, London Bridge and Loch Ness. We also looked at the United Kingdom and the countries that make up the UK. We have also been talking about the football and the Euro 2021 Championships! The children have been playing a small world football game, looking at flags from the different countries and had a go at making their own to take home and wave!