Despite having to adapt to a new way of learning for the first half of Spring term, the children have worked incredibly hard and shown just how resilient and motivated they can be! In our English lessons, we have covered a range of topics including explanation texts and nonsense poems. The children seemed to particularly enjoy our topic of nonsense poems where they created their own nonsense poem in the style of The Michael Rosen Rap and then performed their creation to the rest of the class! In the last week before the half term holiday, we focused on the life and works of Quentin Blake. Amongst other things, the children created a story based inspired by one of his illustrations and pulled all of their learning together by including fronted adverbials, expanded noun phrases, similes and even some direct speech. 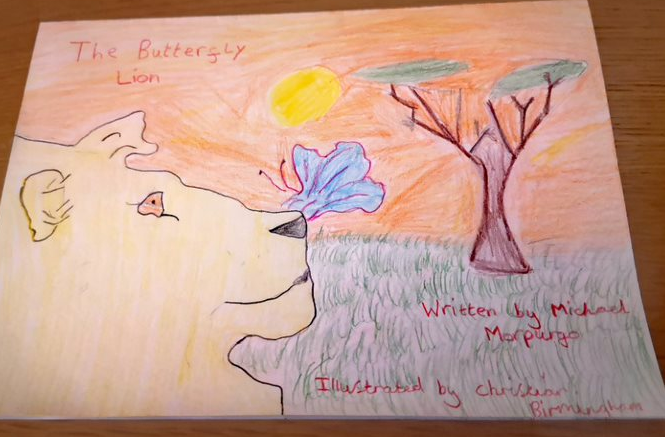 During our whole class reading lessons, we have been reading and discussing The Butterfly Lion by Michael Morpurgo. The children loved the story and we have had some wonderful discussions about how the main character, Bertie, might have been feeling at certain points in his life. We were all very surprised by the ending and had lots of ideas about it! Once we had finished the book, the children had a go at designing a new front cover for the book, based on their interpretation and their favourite parts of the story

The story of Bertie and his time in Africa linked nicely to our Art lessons, where the children have created an African landscape in silhouette. They started by practising drawing African animals such as elephants, giraffes and antelope. They then built up their final picture by painting or colouring in a sunset background. Silhouettes of African animals and trees were cut out and added to the background. The finished products were amazing!

In Maths, the children began the new year by finishing off our multiplication and division topic. We looked at multiplying and dividing 3 digit numbers by 1 digit. We also developed our ability to find factor pairs of certain numbers. This is a very valuable skill in maths and will continue to help us with all of our maths topics. We have now moved on to looking at fractions. It can be a tricky topic at the best of times and even more so with the children learning from home, but we are so proud of how hard they have been working!

Our Science topic of classification and habitats was enjoyed by all! The children are obviously passionate about animals and knew a lot about them already! This half term, we have focussed on how to classify living things in to groups or kingdoms. We used classification keys to work out what animal was being described and discussed why it is useful to group living things together. We finished our topic by discussing what dangers might face animals in their natural habitats and how we can help protect them. The children had lots of ideas and were eager to put them in to practice!

During our Geography lessons, we discovered some budding geography experts in Year 4! Our focus was all about mountains and mountain ranges in Europe. The children enjoyed finding out about all the different types of mountains and how they were formed. They were amazed by some of the pictures and videos showing the enormity of some mountains and the spectacular scenery that surrounds them.