On Friday 7th May we celebrated the NSPCC Number Day across our Federation.

The children learnt more about the NSPCC charity in an assembly and they all took part in Maths activities on the day.

For the NSPCC Number Day Reception played the game ‘Musical numbers’. We sang some of our favourite number nursery rhymes and used number fans to show the numbers in the song. We looked at the 5 little ducks song and loved acting out the song 10 in the bed using our number fans too! We also got to explore numerals in the classroom in our play like we do every day.

In Year 1, we shared Buddy’s story and discussed how his key needed to be put together by solving different maths challenges. The parts of the key were hidden around our classrooms as we worked together as a team to solve each challenge and find part of the key. Once we found all the pieces, we had to fit it together so Buddy had a complete key and could ‘visit’ our school. The children were very excited to complete the challenges and showed good retrieval skills. They knew what they could use to help them solve each calculation. We then discussed how we can keep learning (linking this to our 5 ways of wellbeing in class) and completed some games on TimesTable Rockstars. The children were all keen to continue this when they get home.

Year 2
The children in Year 2 really enjoyed solving Buddy’s Key Challenge. They had to work out the different mathematical problems to put the key back together. The children used the skills they’ve learnt in Maths lessons to solve the problems, which they were very good at. Once the key was pieced together, they were able to solve the final clue to find Buddy, who was hiding in the teacher’s cupboards!
The children also enjoyed taking part in the NSPCC Rocks competition on TT Rockstars, both in school and at home.

Year 3
For Number day, Year 3 completed several activities linked to number and fractions (their most recent topic in maths). The children played a target practise game where they had to add their scores to see who had the highest score in their pair (some games required doubling). They then also played fraction bingo in the style of a scavenger hunt in the secret garden! The children played the game, “Who wants to be a mathionaire” and had to work as a team to earn their points answering the maths focussed questions and then completed an activity called, “Wish upon a star” where they designed their own star based on the definition of a star to be a shape with at least 4 regular points. We obviously all participated in the TTRockstars tournament before the end of the day too!

Year 4 loved taking part in mathematical activities on Number Day. The children helped the NSPCC mascot, Buddy, find the key to the magical door that lets him visit schools. Unfortunately, the key had broken into small pieces that were hidden around the classroom. We managed to solve a variety of clues that tested our mathematical minds! The children especially enjoyed the code breaker questions. However, they also enjoyed the money based questions as we have just finished a money topic in maths and they were eager to put their new knowledge to the test! We also spent some time on the Times Table Rockstar Challenge and are hopeful that we have done enough to win! The children were very competitive and loved being able to see what other classes in the school had achieved so far!

Year 5 have been solving riddles and puzzles to help celebrate number day. The children also completed the buddy challenge. Some of us took part in a sewing intervention to consolidate our understanding of number bonds to 20.

As part of Number Day, Year 6 took part in a game of ‘Who Wants To Be a Mathionaire?’ The children were shown a series of problem solving questions that they had to solve and each correct answer meant that they earned points. The children got very competitive! Not only were the children competitive within their classes but across the year group too with the TTRockstars tournament. In addition to this, each class worked together to solve some maths riddles. Some of the riddles were very complicated but the children enjoyed working through the clues and challenging their thinking. At the end of the day the answers to the riddles were revealed and the winning class was congratulated.

All of the children took part in different activities during the week including solving and discussing the daily quiz questions, puzzle of the day and some of the year groups even enjoyed a daily story linked to Maths.

We also set the children a challenge at home to create a Maths Tin with different items in that they could use to do their Maths at home. There were so many different tins created and lots of great ideas for the items they could use. It proved you really can do maths with anything and anywhere!

We had a fantastic week exploring different mathematical ideas, concepts and problems and we definitely have a lot of enthusiastic mathematicians in our Federation!

If you would like to explore some of the activities with your child at home, please visit the Maths Week England Daily Pages on their website – https://mathsweekengland.co.uk/daily-pages/

In Reception we explored time through looking at watches and clocks. We thought about how to tell the time, remembering that ‘o’clock, is at the top!’ and how watches help us. We studied a clock face and made our own watches. We also had great fun designing our Maths characters and used apparatus and equipment to help us.

Firstly, the Year 1 children enjoyed completing the tasks set and led by the Year 3 classes. They timed each other to see how many they could do of a certain activity or how long it took them. It was lovely to see the different classes working together! 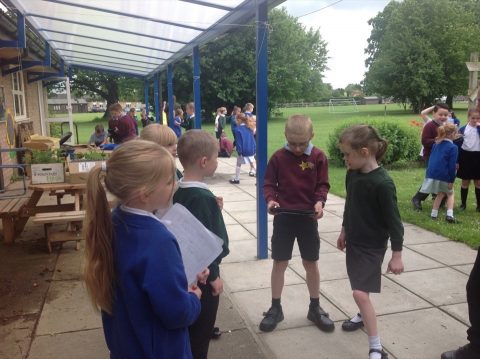 After this session, the Year 1 children designed their own Maths Characters for a competition. We discussed the different areas of maths and all the different equipment we use to help us in maths and how we could incorporate these in our designs. They were all fantastic!

After lunch we had an assembly and we discussed how we use maths in everyday life and the different jobs that require maths skills. We also looked for maths in the hall! We celebrated the winners of the Design a Maths Character competition too.

Finally, we finished the day with some active maths! We completed a Telling the Time treasure hunt in school and enjoyed trying to find all the clocks and matching them to the correct times.

The children in year 2 really enjoyed working with the year 4 children. They timed each other to see how many bounces they could complete in a time limit. The children were excited to beat their highest score and compare scores with each other.

The children then designed their own maths character as part of the federation Maths challenge. We had some great ideas and some of them even used maths resources to help them create their final character.

To kick start the day, the Year 3 children took on the role of teachers for Year 1. They prepared some active activities and demonstrated to Year 1 how to time themselves using stopwatches and timers. Once they were finished, they compared durations to find out who had been the fastest at each task and who had completed the most in the time given. Year 3 were fabulous teachers and Year 1 were excellent learners!

Next, Year 3 connected their recent work on angles to different contexts, including time. We investigated the angles we could find in a clock and in shape (ask your children what acute, obtuse and right angles are!).

After lunch, we participated in a competition to design a maths character for school. The children had some very original ideas.

Finally, the children had an active maths session which required them to practise and apply their times table knowledge.

Starting the day, Year 4 had a fantastic time working with the children in Year 2 on an active Maths session based on time. Putting their teaching skills to the test, Year 4 pupils modelled the activity of bouncing and catching a tennis ball successfully in 30 seconds. In demonstrating their active listening skills, the younger children were then timed performing the task whilst the older pupils kept a tally of their results.  In order for them to improve their score and achieve a personal best, the children repeated this activity three times. Collating the results of the year group into a bar chart was a challenging task due to the sudden appearance of torrential rain. Not to be defeated, the children relocated in the Junior school halls to continue with their fun.

After break, the children investigated some rather strange looking clocks, which had mysteriously lost their minute or hour hands. Working with their learning partners, they had to answer a range of questions on these applying their problem solving skills. Meeting as a whole year group after lunch, we competed against one another to see which class could make a human clock in the shortest time possible. The children all really enjoyed participating in the exciting activities that took place on the day.

Year 5 started Maths Day with some help from year 7 students from Neatherd High School. The older children had planned a problem solving activity with time which the year 5s really enjoyed. It was lovely to see the children from different schools working together.

Next was active maths. As it was raining, the children worked in the two halls and along the Year 5 corridor to race to solve the time treasure hunt. The mathematical language that was being used throughout this activity was very impressive.

During the afternoon, the children had an opportunity to be creative to come up with their own maths character. They also worked closely with their teacher to solve time problems and enjoyed using the time games on Purple Mash.

Year 6 started the day with active maths where we used map skills and clue cards to identify different time zones and countries. After break, Neatherd High School students came to help us to solve problems involving timetables. We enjoyed working together as a team with the support of Year 7’s. In the afternoon we designed a maths character that will be entered into a competition. The winning characters will be our federation maths working wall mascots! We finished the day by completing an investigation on the position of clock hands using different shapes to create patterns.