We aim to inspire a love of reading in our federation, and one way to do this is to have visiting authors come in or to visit authors in other settings. They talk to us about their work, share their inspiration and expertise with us and answer questions we may have for them. Children have the opportunity to buy signed books, and for those that may be unable to we purchase copies for our library so everyone has access to them.

These are the authors we have been working with this academic year, 18-19.

On Wednesday 10th October 2018, author, Nicola Davies, visited our school. At about 13:45, Year 6 and Year 5 sat assembled in the main hall, facing the author of many exciting books. At first she introduced herself, and informed us of her successful career so far. She started reading an extract from one of her bestselling books, A lion Stole My Arm. It was about a young, five year old boy who was out hunting fish, before being hunted by a lion. The predator had ripped the boy’s arm clean off; the boy had then escaped. She read it and told us it was a true story. It was a book from one of her fictional series, Heroes of the Wild.

After that, she told all of us about her adventure, when she went out whale searching. She discovered a group of Blue Whales, and recorded their songs, which were louder than anything she had ever heard. She followed them for a little while, but eventually the whales got scared by the starting of a motor. She then didn’t see them for a long time.

Another time, she came across a humpback whale, which was coming up for breath every 2 minutes. It was staying in the same position in the same area, sinking about 100 meters deep. She had taken a photo of it and returned home.

Then, as an activity, Nicola taught us how to create a whale song. She split up 4 parts of the hall, where children were sitting. Each quarter had to make a different sound which would create a hilarious whale song.  The first quarter were making low-pitched hums, in a certain pattern. The next quarter did high-pitched squeaks in a different order, varying in tempo. The next, had to blow on their arms or their hands to make a weird sound involving one second of noise. After that, the last row made a tone between a roar and a bark, which they had to do once or twice. Subsequently, Nicola ended her speech with an applause from the audience (us) and let marvel her stand of books where a few people from each class purchased a book with her signature inside. Most children returned to class to finish their lesson, while a few others chatted with the author or got a piece of paper signed or written on. 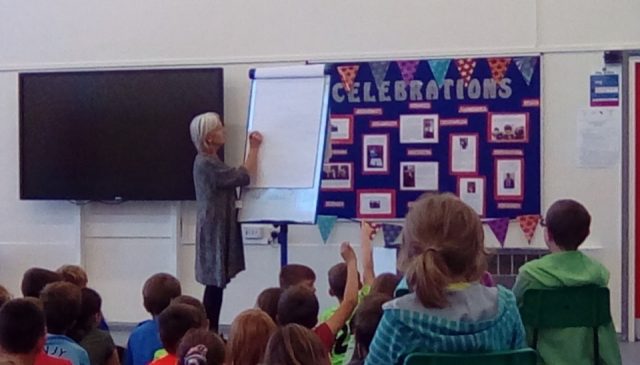 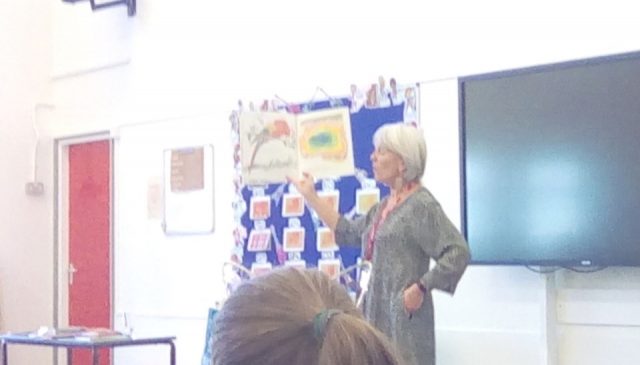 Alex Scarrow is a bestselling local children’s author, who writes the very popular series of books Time Riders. Although they are maybe aimed at slightly older readers, Year 5 and 6 took up the challenge and have been looking to see who can read the whole series first!

Alex gave an entertaining, memorable and inspiring talk to the children about his career, as a musician, computer games designer and now author.

He shared his first book of the series with Y5 and Y6 from TJS and Yaxham Primary School who joined us as well. The children thoroughly enjoyed his talk to them and many took the opportunity to purchase the first two books on the day. We also purchased some of the books for the library for those who were unable to buy them so everyone has a chance to read his stories.

Julia Edwards came to speak to years 3 and 4 about her popular books. Julia is the author of The Scar Gatherer series, a sequence of seven time-travel adventures for 8 to 12 year olds. The fifth and latest book, “Slaves for the Isabella”, brings its hero, Joe, face to face with some of the most powerful men in Georgian England – the slave traders.

The first four books in the series are: “The Leopard in the Golden Cage”, set in Roman Britain; “Saving the Unicorn’s Horn”, set in the Viking Age; “The Falconer’s Quarry”, set in Tudor England; and “The Demon in the Embers”, set during the Great Fire of London.

The teachers are going to read some of these books to the children in their class as they link well to some of the topics we study. We have bought sets for the library for everyone to enjoy and some children bought their own copies.

Alex Bellos visited the school on 23rd February 2018. He is an established author who is well known as a mathematician, and children’s author of the Football School books as well as books on Science and other topics.

Alex spoke to years years 5 and 6 about his life as a journalist, author and his life in Brazil where he ghost wrote Pele’s autobiography. He gave an insightful look  into the many unknown facts of football. The children were all involved at points during his talk, some even doing some drama at the front of the hall.

Alex is also a well known and very clever mathematician. He has regular articles in the guardian and some of the children were copying his methods for calculations. He not only inspired them as readers, but also as mathematicians.

His work for the guardian can be found here www.theguardian.com/profile/alexbellos

This website uses cookies to improve your experience while you navigate through the website. Out of these, the cookies that are categorized as necessary are stored on your browser as they are essential for the working of basic functionalities of the website. We also use third-party cookies that help us analyze and understand how you use this website. These cookies will be stored in your browser only with your consent. You also have the option to opt-out of these cookies. But opting out of some of these cookies may affect your browsing experience.
Necessary Always Enabled
Necessary cookies are absolutely essential for the website to function properly. This category only includes cookies that ensures basic functionalities and security features of the website. These cookies do not store any personal information.
Non-necessary
Any cookies that may not be particularly necessary for the website to function and is used specifically to collect user personal data via analytics, ads, other embedded contents are termed as non-necessary cookies. It is mandatory to procure user consent prior to running these cookies on your website.
SAVE & ACCEPT
Adventures